The first night in Yangshuo was my first time in a less developed part of China. Tortoise and I thought we’d eat at one of the bustling local restaurants. I was so amused when our crockery arrived pre-sterilised in a vacuum pack. There was no need for the usual rinsing with a splash of hot water. No pictures of the dinner we had because we were too hungry and forgot to take pictures. We had beer duck (pi jiu ya) which was quite spicy but had no trace of beer in it. We had difficulty finding the meat as all the pieces seemed to be nothing but bone and gristle. I suppose that’s the consequence of being in the countryside. 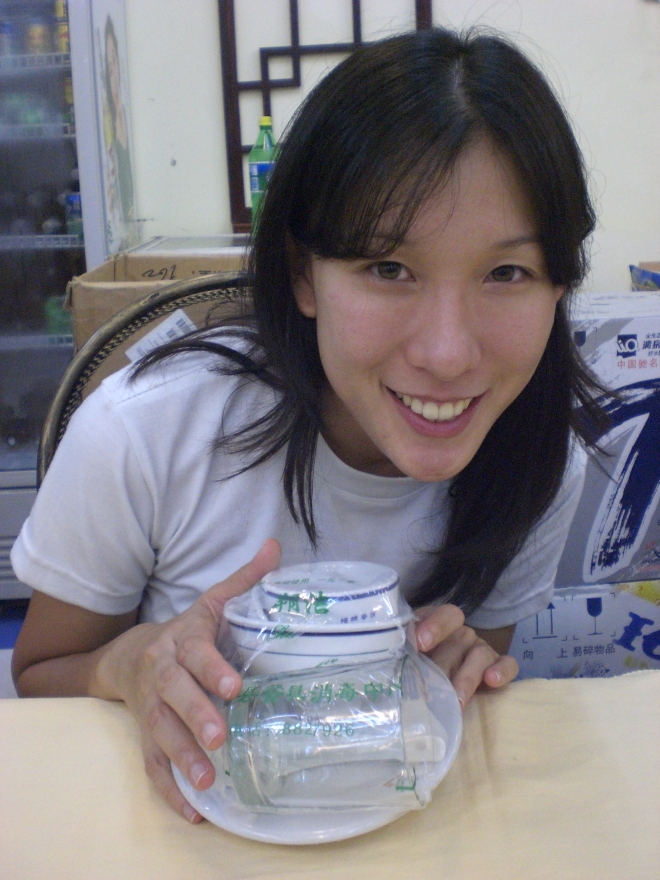 The next morning we staggered out for breakfast at this makeshift stall selling Guilin mifen (rice noodles). The lady would hand over a bowl of noodles topped with minced meat and black fungus, and then it’s up to the customer to add the ingredients to taste. There was piping hot pork stock (of course fortified with msg), several kinds of pickles and boiled soy beans.

It was a delicious combination. I particularly liked the kang kong and long bean pickles and developed a taste for them from then on. The combination of ferment, sour and spicy was so addictive that for the rest of the trip I’d often seek out Guilin noodles or anything with long bean pickle in them.

Stopping for lunch, we also had horse noodles (ma rou fen). It’s been a long time since I last had horse (that was in sandwiches in Germany). It tasted a bit like venison and was quite robust and pleasingly chewy. I liked it, but Guilin noodles are still better.