A friend and I went to explore the Lim Chu Kang farm area on a lazy Sunday. Our first stop was of course for lunch and we had it at Poison Ivy at Bollywood Veggies Farm.

First, we cooled off with an icy glass of fig tea and then perused the menu.

We ordered quite a bit of stuff off the special menu of the day. There was a lot to choose from but only two bellies to fill, so we had a tough time choosing.

We started with the grilled brinjal. Even though the presentation was awful, with the tomato and onion sauce slapped on messily, it tasted quite decent. Dunno why but it seemed to be fried in egg rather than grilled like it said on the menu. I liked the soft texture It was not badof the brinjal although the sauce was a touch too sweet. My friend said that he had eaten better on previous visits.

Next up was the banana curry. It’s so popular that it’s often sold out, so get there early for your banana curry fix. It was quite unusual because the bananas were the starchy less ripe variety. It went surprisingly well with the curry although I felt that it could have had a little more depth, perhaps paired with another vegetable, either carrot or cabbage maybe.

Our last main dish was sweet potato leaves fried in chilli, garlic and onion. It was delicious! I liked how tender it was. It’s hard to find sweet potato leaves that aren’t fibrous and tough. These were deep green and very young, going very well with rice. 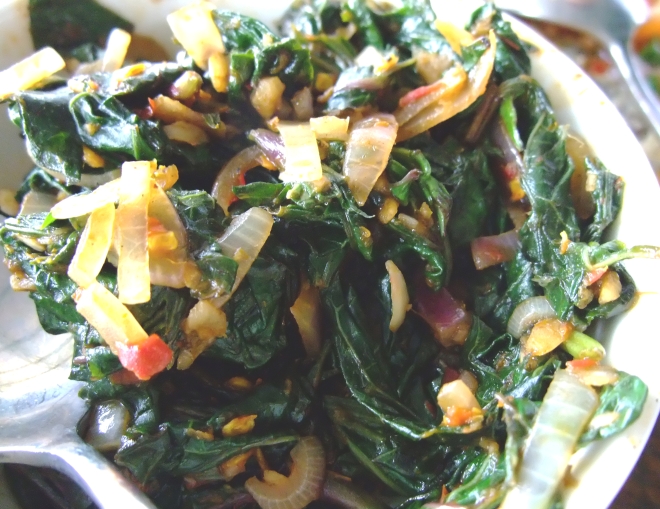 For dessert, we had banana crumble and kueh kosui. The crumble was more of a cobbler and came with the usual supermarket vanilla ice cream. I liked the texture of the banana and suspect it’s probably pisang rajah. The topping and ice cream were pretty run of the mill. I routinely make better crumble than this and in my books, crumble has to come with custard. Not up to my standards.

Now the finale certainly was a worthy one. The kueh kosui was what it should be: soft, sticky, coconutty, caramelly and yummy. It came in a big slab and had to be teased out in bits by the sticky forkful. Even my true-blue grandma-makes-everything-from-scratch Peranakan friend said it was decent. Pass! 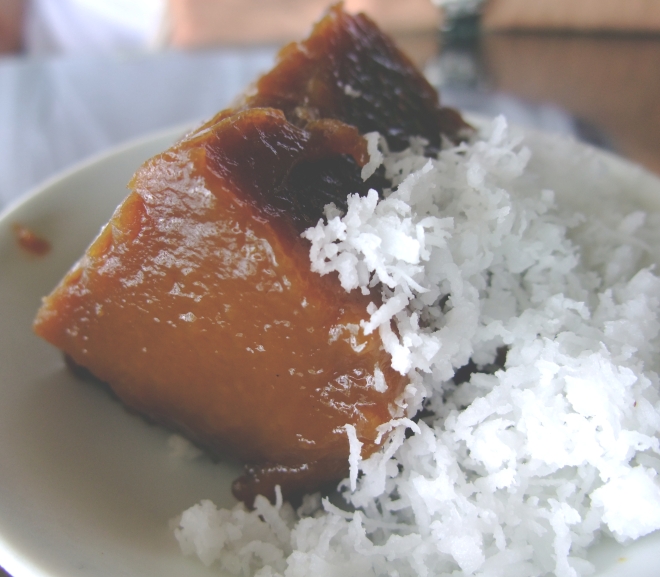 A word about the portions: they’re not exactly the most generous, but it makes for reasonable prices and the chance to nibble at a lot more things. I think small is beautiful, so I’m not complaining. Just take note if you’re a big eater, as opposed to merely a greedy eater like me. The bill came up to $23.50 for the two of us. It was decent considering we had two fig teas, three dishes with rice and two desserts.