Nanjing proper is another one of those modern second tier cities with too many new buildings sprouting towards the sky. The sameness coincided with the dull weather. Aside from a little morning adventure in the side streets searching for local breakfast (the biggest bowl of noodles in beef broth I’ve never finished and some odd little tandoor pastries), there wasn’t much to Nanjing city. Most of its sad history has been buried in the pilings of the new skyscrapers.

After a visit to the very credible (and free in 2008!) Nanjing Museum, we headed out to Zijing Shan (literally: purple gold mountain) to visit Sun Yat-sen’s Mausoleum and Memorial. Sun Yat-sen was one of the fathers of the revolution against the Qing Dynasty and highly revered by both China and Taiwan. The first notable sight of the Memorial is the Bo Ai Gate (literally: love for humanity). It being a weekend, there was no escaping the tourist horde that we were a part of. I amused myself by taking pictures of people taking pictures. It was fun to see how everyone posed in exactly the same way exactly the same distance away from the gate!

Going past the gate, we entered the massive complex and climbed up the many steps. Apparently the number of steps matched the number of county-level cities in China at the time of construction. How did I know? I eavesdropped on the local guides taking groups around! There were so many of them going past with their matching caps. There’d be a horde of red caps, then fluorescent green, then yellow. Now I wish I got a snap of them.

Right at the top was the Mausoleum. I’m not sure if Sun Yat-sen’s body was really inside. Still, the done thing was to join the milling crowds and go in whenever the guard outside whistled the next group in. It was all as orderly as China got, and very Communist. People stared at me for taking this shot. I felt quite the paparazzo.

Of course, once in, we were quickly herded round the room. The guards yelled at those snapping photos, but I don’t know whether they were yelling for people to get a move on, or not to use flash, or not to take photos at all. Such being the chaos, I ignored it all and hung back to take the flash photos I wanted. No one stopped me. It’s funny how all these people (myself included) were so fascinated by a marble sculpture of a dead man.

Now the ceiling is far more fascinating because this was the standard Sun Yat-sen created. It’s one of the only places in China you can find this. The image is retained in honour of Sun. Outside of Sun-related memorials, this symbol is pretty much prohibited because Taiwan uses it as its national flag. 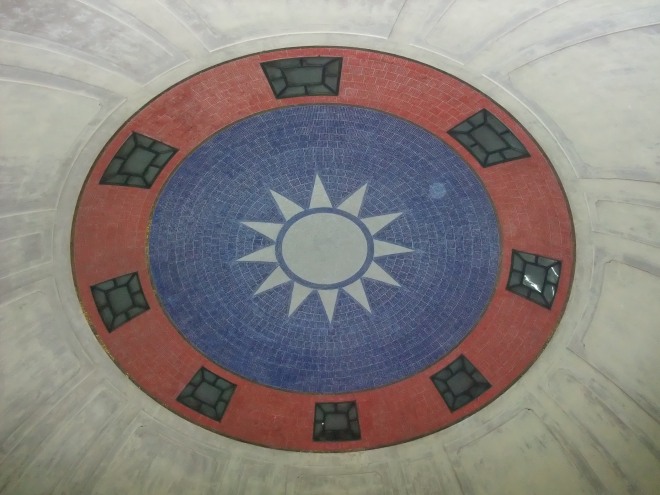 Very soon we were spat out of the place as the next group was waved in. 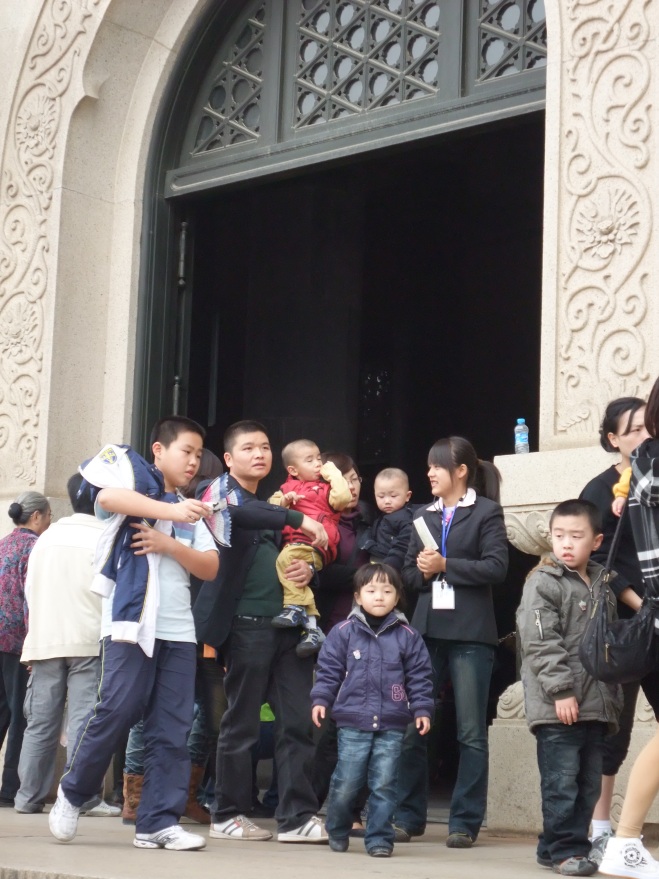 Heading down from the hill, I took in the romantic view of the countryside shrouded in late autumn mist.