My brother and sis-in-law went to Equinox Restaurant for their champagne brunch. Here’s their report:

Its been a long time since I’ve done brunch, so I was really looking forward to Sunday, especially since I’ve not tried the Equinox brunch before. 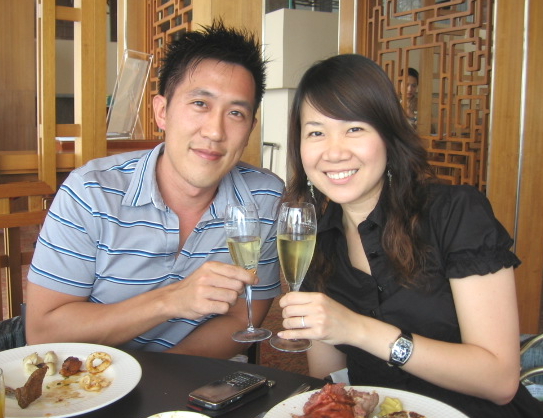 The appetisers were a great start. There was the usual range of cold starters and seafood, including two types of oysters, as well as a nice sushi platter with great soba. My dining companions liked the soba so much they had multiple servings. I was happy to see a leg each of Parma and Spanish Iberian ham. I love ham, and it’s great to see the chef taking advantage of the relaxed AVA restrictions on Spanish ham. However, I was a bit puzzled to see it served on its own. Perhaps some sweet melon or crusty bread by the side would do the trick.

There was also something unique – a caviar station, complete with a cook flipping fresh mini-blinis to hold the caviar. The salty caviar was a nice contrast to the buttery blinis, which were good enough to eat by themselves.

The mains were dominated by roast meats – a very impressive display of roast prime rib, roast leg of lamb, roast pork, and a whole turkey, all in a row waiting to be carved up, flanked by a foie gras and poached fish station on either side. The roast beef was good, and was devoured by the end of the buffet. The roast pork also stood out – it’s tough to get pork right, the loin cut was succulent and moist, not at all overcooked.

For most of the meal, I was silently disturbed that the dessert section seemed to be missing! I thought perhaps dessert was an extra-charge ala carte item, or maybe the waiters would suddenly clear the sushi section and roll out the dessert platters. Finally, someone pointed out that the dessert section was tucked in a corner under the staircase, outside of the main dining area. Phew! We excitedly went for a scout – a small spread, especially compared to the mains and starters, with a bored-looking cook flipping pancakes under the stairwell. I had an unusual strawberry and rhubarb mousse (it’s very rare to find rhubarb in Singapore), and some crumbly, chocolate nut cake called “baci baci”, which incidentally tasted nothing like the Italian chocolate kisses.

Equinox serves Moët for its champagne, which definitely makes the experience more premium. Strangely enough, the price difference between the champagne brunch ($128+++) and the virgin brunch was only about $20, definitely making the champagne option much more worthwhile. They also serve a range of cocktails and wine, but most of the mainly local crowd were happy with their champagne.

The biggest downer was the live music, which was too loud and was horribly out of tune at time. (Not just my opinion, but also one of our dining companions who works in the arts/music industry. Quite clearly the duo would never get a gig at her joint!) The bad singing was topped off with a 2 min long finale to Sinatra’s My Waaaaaaaaaaaaayyyyyyy. Urgh.

What made up for the singing, was of course the fantastic view, which I suppose is the main draw of Equinox. There is something very calming about being on top of the world and having a birds-eye view. It’s also a bit nostalgic – I think the last time I came up during daytime was a decade ago when it was still called Compass Rose. Champagne brunches had not been invented, and the ultimate uppity luxury was going up to Compass Rose for high tea. I wonder if Equinox’s champagne brunch will ever return to those heydays.