I like going to Tekka Market. Both the market and the hawker sections have such great stalls. The market side always has stuff open all the way into the afternoon on Sundays, making it ideal to catch some fantastic lunch and then buy groceries for dinner. The vegetable stalls have such a variety of ingredients that each time I go I find something I haven’t seen before. It’s a great place to get ingredients for Vietnamese or Thai food. It’s so easy to find Thai basil and other herby leaves here.

Now the hawker side is chock-full of nasi briyani stalls. Yakader is the place I go to. This was the place I had my briyani epiphany. Before this, I never understood why one would cook nuts and raisins with savoury rice. The nuts would just be soft and the raisins pulpy and sweet, which I don’t fancy in savoury food. It all became clear when I had my first spoonful of their rice. The cashews, though not crunchy, gave a lovely fragrance to the rice, and the not-too-sweet raisin gave it extra interest and texture. Now let’s get on to the mutton. It is amazing how tender this stuff is. At first, it seemed deceptively unyielding to the fork, but once a morsel was hacked off, it fairly melted in the mouth. Spiced just right, this stuff is briyani heaven.

DC spotted some sup tulang at Hanifa’s nearby and ordered some mutton bone soup. It was very peppery and quite nice to gnaw at. I’m not super keen on chewy tendon (I like mine soft and melting), but the soup was nicely flavoured, though a bit of a shock to the system with the amount of pepper in it. It was so good that the family at the next table asked us where we got it and happily slurped up their order. I’d go back to try the mutton and tongue next time.

These sticky snail buns are always a big hit. As Mum prefers non-chocolatey things and DC’s mum likes nuts, these were a natural choice for Mother’s Day last week. They’re so good that I caught Mum chewing on something as she snuck out of the kitchen. True enough, there was one less on the rack! These gooey, crunchy spiced buns are quite irresistible both fresh out of the oven and also the next day cold from the fridge. Somehow keeping it cold keeps the syrupy bits crackly and crunchy. I can never stop at one.

Packed into a pretty box, these little buns beckon so glisteningly and enticingly, it’s no wonder Nigella urges in her Schnecken recipe to “apply to face” as soon as cool! Now I’ve made loads of modifications to her recipe to suit my taste and sense of practicality. I replaced golden syrup and maple syrup with honey because it’s easier to find and I have no idea what to do with leftover golden syrup. Plus I find that the fragrant honey I use gives a lovely aroma to the buns. Also, I find  the recommended amount of 150g sugar for the filling a bit excessive and have cut it down tremendously. Feel free to scale up the sugar if you have an especially sweet tooth! Lastly, I find that this recipe makes quite a lot of dough, so make sure that the buns don’t sit too long in the proving stage. Either that or halve the amount of dough and make 18 instead of 24. That would mean less dough and more syrup, so leave to prove for as long as you like instead of hawkishly watching them to make sure they don’t fill up the muffin tin too easily.

Chocolate chip cookies are a perennial favourite and dark double chocolate cookies are even more well received. I make up a batch of these when I want to make the chocolate lovers in my life happy. Feel free to substitute whatever nuts you like, I happened to have pecans around. I can imagine it with dried fruit too, like orange peel.  Try to serve it fresh from the oven if you can. The chocolate oozes in a lovely way.

The whole week was a week of ramen cravings for me. This time we went to Marutama, which I’d not had for years. I somehow never made it back to the one at Central because I found the restaurant a bit dingy and cramped for a meetup, plus memories of queues put me off. I quite liked the ambience of the branch at Liang Court. It’s still dark, but much smarter-looking.

We had chashu on the side. It wasn’t too bad, being tender and fatty with the bonus of being charred to order. It’s far too overpriced for the miserable four pieces you get though.

Now I really liked the aka ramen. It’s so different from other versions as the toppings are some kind of  seasoned chicken ball, coriander and a squeeze of lemon. Also, the broth is made of 12 types of nuts rather than pork stock. Sure, there was still the usual stuff like runny(ish) yolk egg, seaweed and sesame seeds, but here even the noodles were different. They were much thinner than the usual, resembling the instant noodle type of ramen more than the traditional sorts. I enjoyed the freshness of the coriander and lemon, and with the richness of the soup, it’s now my favourite ramen place.

Having said that, I still need to find a new favourite place for the more typical pork bone ramen. Suggestions anyone?

I like the strong, bitter, almost meaty flavour of rocket. It seems to be a love it or hate it affair with this leaf and I’m firmly in the love-it camp. Rocket works not just as a salad leaf to perk up an otherwise boring lettuce salad, it also comes into its own used as a herb in pesto. The fact that it’s priced like a salad leaf, not a herb, also boosts its popularity in eatdrinkcooktravel land.

I’m normally quite lazy when it comes to pesto, so lazy that I don’t even want to break out the food processor for it. That’s why my favourite way to make pasta in pesto is a sort of deconstructed version. 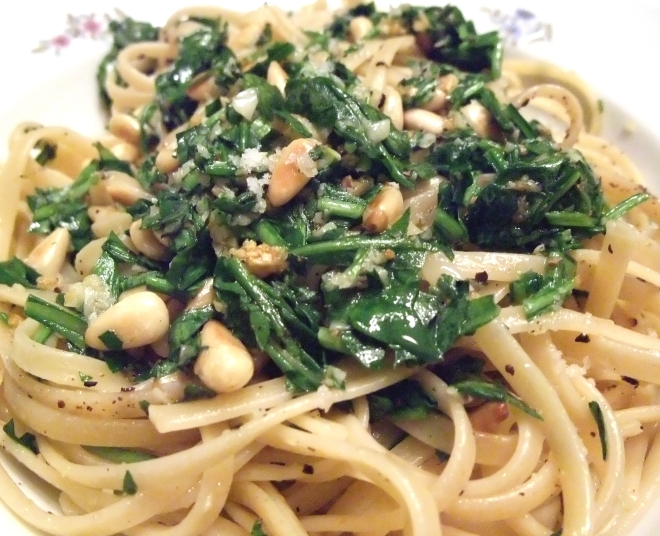 This recipe is the first of a loose series of pesto-inspired experiments. Pesto is a typical Italian pasta dressing. It’s associated with Genoa in the Liguria region, an area famous for olive oil and apparently perfect basil with the most ideal balance of flavours. Italian mamas make it by pounding garlic, basil leaves, pine nuts in a mortar and pestle, hence the name. Grated pecorino cheese is then stirred in to complete the pesto.

I’ve only made pesto using a mortar and pestle once and learned my lesson after that: it is long, hard work. Some people swear by using a mezzaluna for the job but purists just laugh. Now I use a food processor like the average sensible modern cook.

In this recipe I use parmesan cheese simply because it’s the easiest to find. Please use pecorino if you can find or afford it.