You know what they say about always trusting what you hear on the ground and that your guesthouse is the most reliable info source? Well, it’s not always right that I can tell you. Thanks to my guesthouse, I probably took the longest route ever to get to Clark airport for my flight out of The Philippines. I guess it turned out pretty cheap, but I sure would’ve paid the extra needed for a direct bus there.

This is what happened: I checked out at the ungodly hour of 5.30am and hopped into a cab to take me to Pasay Bus Terminal. There, I caught the onward bus to Dau. It was a pretty uneventful trip as it was an airconditioned and not very crowded coach. It was only when I got off the coach that I discovered to my horror that (a)  I still had to navigate past the gate of Clark Freeport Zone to get into the airport and (b) the trike ride from Dau would only take me to the gate. The 5 minute trike ride of less than 1km cost me 50 PHP (S$1.50). Feeling stiffed, I stood uncertainly at the gate of the Freeport Zone trying to figure out how to get inside without spending the last of my reserves on a taxi (200 PHP) and getting stranded for not having the local currency to pay my airport tax.

A couple of jeepney drivers offered to take me and my dive gear (it was a huge bag) into the complex for 180 PHP. I refused and decided to try my luck with a bit of crying. The stress of the journey and the early morning start helped. Soon enough, another jeepney driver came up to me, telling me he could take me into the Zone somewhere close to the airport for 20 PHP, but I’d have to walk to the gate myself. Wiping away my tears and thanking my lucky stars, I climbed into the front seat of the jeepney (a rare privilege), waited for it to fill up with people and we were off!

The Zone was rather large, and to my surprise (doh!), more people wanted to get to other parts of the Zone than the airport. I was set down about 5 minutes later in a fairly deserted area about 500m away from the airport. There wasn’t anyone around except the odd security guard patrolling the odd gate. They all smiled at me and pointed me in the right direction. Given the dive bag that was almost size, it was pretty obvious which direction I was heading. One of the guards even introduced himself and we had a little chat. Another one motioned to me that I had to jumped across a drain at the narrow part if not I’ll be stuck and not get to the terminal! It’s amazing how friendly they all were to an odd stranger.

After a pretty long and sweaty trek in the hot sun, I finally reached the airport gates! After showing my passport to the guards, I fairly stumbled to the cool of the waiting area outside. A chat with the locals made me realise that I was quoted the right prices, and even the lowest possible prices. They were amazed that I trekked in to the airport.

After taking a cab, a bus, a trike and a jeepney, then going on foot, I hopped on the plane and sank into the comfy seats, secure in the knowledge that Noid was picking me up in her car on the other side.

[post script: I later found out that there were scheduled buses leaving from SM Mega Mall to Clark Airport. Le sigh.]

Jeepneys are the quintessential way of getting around in The Philippines. Traditionally, they’re etrofitted ex-American army trucks painted all hues of colours except subtle. Most looked totally pimped out and a lot of times the gangsta look was contrasted with lots of devoutly Catholic imagery on the inside. The sides were normally painted with the route it plied and you’d normally climb in, call out your destination and pay your fare to the conductor. The jeepney is one of those vehicles that is never full. More and more and more and more people pile in and if there isn’t space on the inside, the conductor would hang on to the back of the jeepney. If there still isn’t space, it’s last in stay out as the last few guys would have to hang on for dear life together with the conductor.

I never quite got the hang of these jeepneys as I’d never really know where I was going and it was far easier just taking a taxi, especially with my big dive bag.

The ones in the picture below are strictly speaking buses, not jeepneys but they’re really cool anyway. These are long distances buses at the northern Cebu bus terminal. All sorts get on the bus. Omar and I had an amusing time trying to take a video of a pair of cardboard boxes with holes in them. One cheeped a lot and the other crowed at intervals. The problem was that the video was long and tiresome and Murphy’s law struck: no crowing at all until a good boring minute was over. It was my first rooster on public transport!

We left Guangxi and headed north to Guizhou, still sticking to Dong territory. We took an early mianbao che (minivan, literally: bread bus) back to Sanjiang and swapped our loaf-shaped transport for a bus that had seen better days. To our surprise, we were not the only tourists headed to Zhaoxing, another Dong village. There was a European couple that looked like faded hippies hidden at the back.

Thinking that this would be an uneventful journey like our last bus ride, we were annoyed when our bus stopped along an ugly mud road winding alongside a murky river. There was construction going on at the embankment above us, most likely a brand new highway. We sat and waited. And waited. And waited. Soon, people got off the bus as there were no signs of people moving.

A motley bunch of people stood and squatted by the buses. There was a group of fairly trendy girls from Guangdong with a contemptuous attitude. They weren’t pleased at all to be in their high heels on a mud bank. Buying a pack of melon seeds from a tribal vendor who appeared from nowhere, they spat melon shells disdainfully at the bus tires. Others haggled and heckled the vendors, complaining that ¥10 for instant bowl noodles and hot water toted from kilometres away was daylight robbery. It was lunch time and they were annoyed that they wouldn’t reach their destination in time for the noon meal. 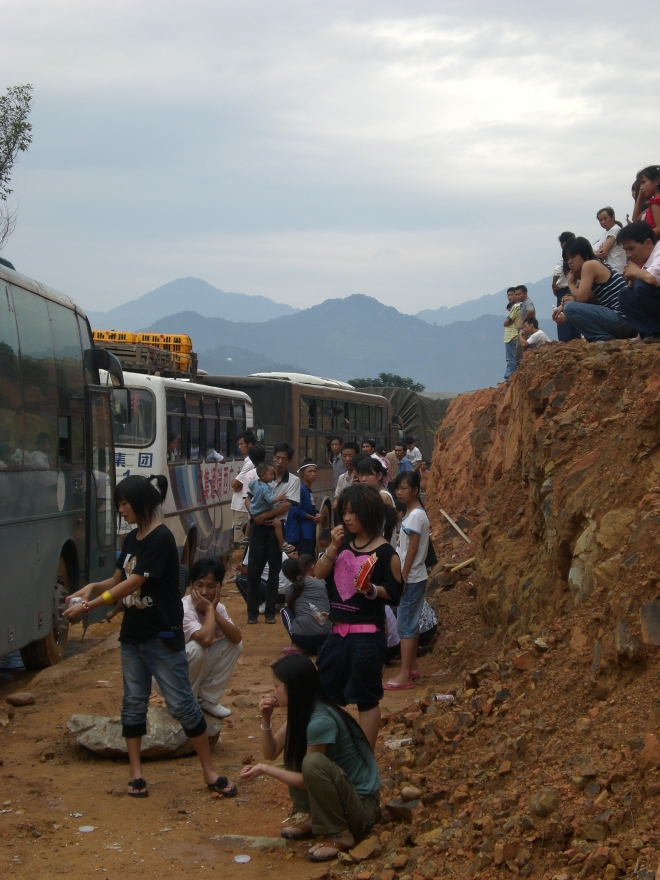 I got bored observing all the bored people and headed to the front of the column to check out the cause of the jam. There must have been a mudslide because the road was impassible. A small covered truck was stuck in the mud as it tried to negotiate the tricky bend. There were lorries, trucks and buses of all shapes and sizes waiting behind it and no one dared to take the space at the inner lane for fear of meeting the same fate.

People milled around and pointed and it didn’t seem like much could be done. Lots of people muttered suggestions and then out of the blue, a mixed group from different vehicles organised themselves and started putting pieces of flat stone into the mud. I was taken aback by how someone had evidently gotten things going simply by example and the rest just wordlessly followed. Even the ticket seller lady from our bus helped out. I was very impressed by this show of solidarity and proactiveness. To me, it was yet another sign that China had great things ahead and was not to be trifled with. Later, Willy told me that something like that would never have happened in Spain and that we’d probably be stuck there for months instead of hours.

In the end, the stones were not very helpful as the truck tried in vain to get unstuck. Before long, an excavator from the highway construction came over and dug us all out of the jam.

Now what surprised me even more than the stone-laying was this: once the track was clear, the first few trucks moved to the side so others could pass. The drivers agreed that those in the buses needed to be on schedule more than the trucks and that the trucks could make matters worse by getting stuck again. Better to let the slightly more nimble buses ahead first. I was pretty much floored by this big-picture thinking. It’s the one event that impressed me the most about Chinese people.

Before we could hustle to get back on the bus, we were told to stay put and wait for the bus to roll up and pick us up instead. Don’t worry, they can recognise you.