Today I share with you how a mistake led to lots of beautiful Christmas presents. A few months ago, I’d left out a bag of frozen cranberries by mistake and had to figure out what to do with with them and fast. A quick google showed up cranberry sauce and jam, but I was worried that jam making would be complicated and difficult. Luckily, I hit upon a recipe from 101cookbooks.com (originally from Falling Cloudberries) that seemed easy. It was also convenient since we were having people over for breakfast the next day.

Anyhow, having people over was the perfect excuse to test out my new oven. Put freshly baked scones and freshly made tart cranberry jam together and slather with either clotted cream or butter for a glorious combination. Then have grilled mushrooms and crispy bacon as chaser and it’s a very satisfying breakfast.

These need to be made fresh and eaten while still warm. If you have leftovers, they must be heated up in the toaster oven, otherwise will have an awful dense texture. Don’t keep them any longer than overnight because it just gets too heavy to eat then.

I used a bag of frozen cranberries and added some of my own spices. The first round, I used cinnamon and star anise and the second time, lemongrass, lime and clove. Try various combinations and see what works for you. If you’re going to make a lot like I did for Christmas presents, don’t worry about the proportion of apple to cranberry, just make sure you scale the sugar with the cranberries and it should be all good. Another tip: don’t taste the jam immediately after it’s done. It’s somehow very sour and a bit unbalanced then. Let it sit for 30 minutes at least if you’re going to eat it fresh. The flavours will mingle and the sharpness will mellow, then it’ll be all good.

Makes 1 standard jar plus some for breakfast for 4.

I scaled up the recipe with these proportions: 1.5kg cranberries (4 bags of 340g each added up to that much after washing!), 600g sugar, 3 lemons, 6 lemongrass sticks, 6 star anise, 3 apples. It took longer to cook the apples down in step 5, about 30 minutes or so and the mixture only thickened slightly. Then it took 10 minutes for the cranberries to cook through. It made a huge pot that ended up with 4 big and 4 small jars of jam. Here’s what they look like upside down.

I was dreaming of Xi’an lamb skewers but didn’t have the time to find a better alternative to the version at Yang Gui Fei. My take is very much a fusion version of this and is far from the original. Plus, it being nigh impossible to buy good-tasting, deep-flavoured lamb here, I had to stick with the usual supermarket New Zealand lamb. It was passable but not the same. Make sure that you buy a fattier piece of lamb, the fat here is essential, otherwise you won’t get succulent yet charred bits. While this is hardly gourmet food, the beauty of it is that it’s incredibly fast. If you time it right, you could get dinner in 15 minutes.

I like going to Tekka Market. Both the market and the hawker sections have such great stalls. The market side always has stuff open all the way into the afternoon on Sundays, making it ideal to catch some fantastic lunch and then buy groceries for dinner. The vegetable stalls have such a variety of ingredients that each time I go I find something I haven’t seen before. It’s a great place to get ingredients for Vietnamese or Thai food. It’s so easy to find Thai basil and other herby leaves here.

Now the hawker side is chock-full of nasi briyani stalls. Yakader is the place I go to. This was the place I had my briyani epiphany. Before this, I never understood why one would cook nuts and raisins with savoury rice. The nuts would just be soft and the raisins pulpy and sweet, which I don’t fancy in savoury food. It all became clear when I had my first spoonful of their rice. The cashews, though not crunchy, gave a lovely fragrance to the rice, and the not-too-sweet raisin gave it extra interest and texture. Now let’s get on to the mutton. It is amazing how tender this stuff is. At first, it seemed deceptively unyielding to the fork, but once a morsel was hacked off, it fairly melted in the mouth. Spiced just right, this stuff is briyani heaven.

DC spotted some sup tulang at Hanifa’s nearby and ordered some mutton bone soup. It was very peppery and quite nice to gnaw at. I’m not super keen on chewy tendon (I like mine soft and melting), but the soup was nicely flavoured, though a bit of a shock to the system with the amount of pepper in it. It was so good that the family at the next table asked us where we got it and happily slurped up their order. I’d go back to try the mutton and tongue next time.

Shinta and I were in the Arab Street area so we had to drop by Minang Nasi Padang for lunch. DC had raved about it before (he’s now raving about another place, but more about that in a later post). As usual, we ordered too much. Between the two of us we had beef rendang, curry chicken, squid in its own ink, begedil and sweet potato leaves cooked in coconut milk.

It was all very good quality, with the tender, well-spiced chicken and the richly gravied potato leaves being above average. The  dry-style beef rendang, however, stole the show. Its incredibly depth of flavour and smokiness blew me away. They spiced the dish incredibly well and toasted the spices so well that the slightly tough texture of the meat actually added to its allure. Upon further chewing, the meat yielded more flavour. Despite the lack of tenderness, it’s my favourite beef rendang thus far.

It was yet another overdue meeting of the newly renamed Single Malt Appreciation Club. In addition to our mainstays of Lagavulin 16 and Laphroaig Quarter Cask, we had a Highland Park12, a Macallan Whisky Maker’s Edition and a Kilchoman. Tricia brought the Highland Park from a sojourn to Batam and the Kilchoman from whisky trip to Scotland. Hypodermically and Jam somehow found the Macallan sitting at home.

It was up to Tricia, the resident whisky expert to line them up for tasting. Her usual impeccable taste was spot-on! The Highland Park first then the other Highland Macallan, followed by the Islay with the youngest Kilchoman first, then the restrained and elegant Lagavulin and last the brash, in-your-face Laphroaig.

I must admit upfront my bias against Highland malts. I’m not so keen on sweet and spicy without the peaty as I find it quite flat and not a great deal different from other liquors. What makes whisky special for me is the complexity that peat brings into the picture. With that, I dismissed the Highland Park 12 (40%) quickly by taking a quick whiff and sip of Tricia’s dram. As expected, it was nothing but sweet honey and fairly one-dimensional.

The Macallan (42.8%), as a Speysider, fared a bit better. I think I’ll enjoy drinking it on off nights where somehow an Islay would be too much work for me. The honey was rounded with spice and orange peel, quite the thing to put in a fruit cake and then enjoy with said cake. The tasting notes mentioned toffee but I didn’t get any, probably because I was still recovering from a bout of flu. Definitely one to try again.

The Kilchoman (pronounced “kil-ho-man”) Spring 2010 Release (46%) was a strange hybrid of honey and peaty smoke. There was something rough and unfinished about it,  I guess that indicates that it would benefit greatly from more ageing. Nonetheless, it was full of promise and I’m definitely looking forward to a later release. Just too bad it isn’t available in Singapore yet.

I was a little tired of the typical twee cupcake thickly coated with icing everyone scrapes off and throws out. (Dudes, icing sugar is expensive yo.) Instead, I went the other way and made giant cupcakes. The good thing is that this method cuts down on the bother of filling a zillion neverending cupcake cases. I made five in this recipe instead of the usual 15 or so. To make things a little special, I soaked some dried cherries in kirsch and filled the cupcakes with these little surprises.

The recipe itself is the same as the Orange Clove Cake, just that I added two grated apples to the cake mix for a fruitier, slightly denser and moister cake.

Pear poached in red wine is one of those chi-chi restaurant desserts that’s actually quite a no-brainer to make at home. It’s so much easier yet somehow more impressive than baking a cake. I made some the other night and it was such a revelation!

Here’s where all the leftover red wine stashed in the freezer comes in useful. Or you could just use any cheap not-too-sweet red. Use as many or as few of the spices as you like. I think the poaching liquid ends up like mulled wine with all the spices!

For dessert, I reduced some poaching liquid to make a sauce.  I left the pears soaking in the rest of the poaching liquid overnight. The next morning the pears deepened to the darkest purple ever. This time, I didn’t bother with a reduction and just had them cold as a fancy fruit compote with my thick yogurt. Both were very yummy. 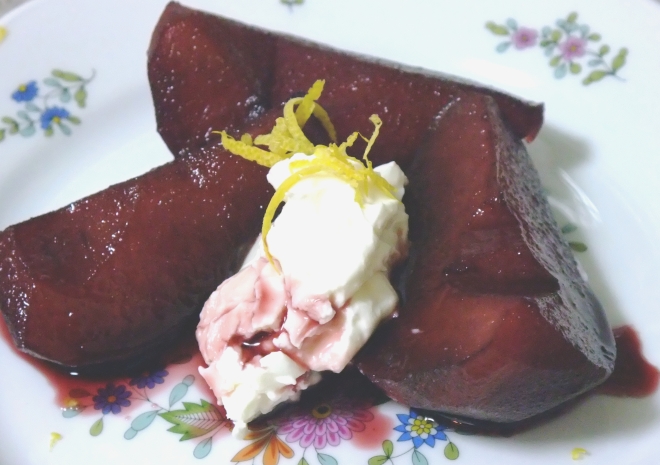 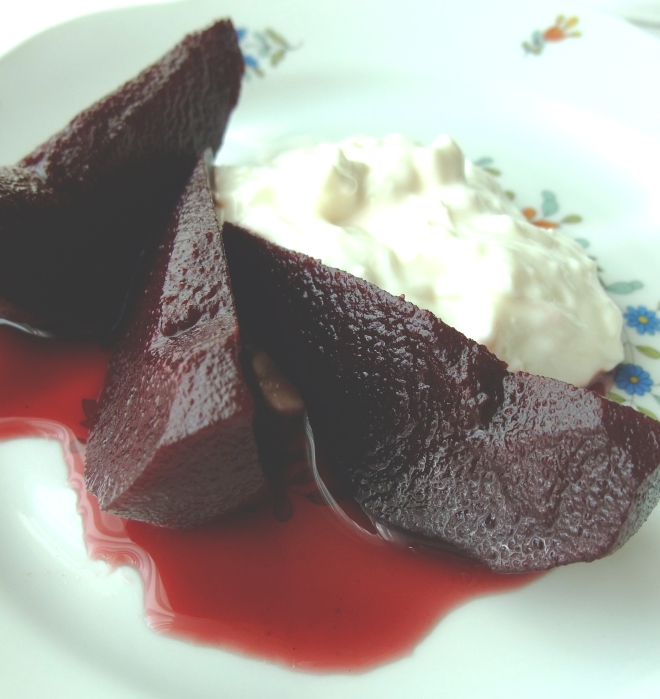