Upper Thomson is an area that I haven’t explored much and I’m glad that recent developments have allowed me to do so a bit more. We had brunch at Meng Kitchen where they specialise in bak chor mee ($4 per bowl). DC thinks this squares up as a top contender for #1 in his books, especially since we didn’t have to queue or wait long even. The noodles were nicely al dente, especially the mee kia. I liked the smoothness of the vinegar, seems like it’s a superior brand compared to the regular versions. I liked how generous they were with the dried sole, but would’ve liked the liver to be less cooked. Pink is the desired doneness, not tough and brown. The soup wasn’t too bad, a notch above the typical longkang jui (drainwater) that’s normally served nowadays.

Next, we wandered round to Salted Caramel to get our fix of (guess what?) salted caramel ice cream. Accompanying it was lychee ice cream, which I felt was too grainy and hadn’t quite enough lychee flavour. The salted caramel ice cream in our double scoop ($5) was top notch, with an excellent smooth texture and just the right hit of salt. I like how you couldn’t actually pinpoint the saltiness, it was simply there to accentuate the sweetness of the ice cream. The strange thing about this ice cream is that the caramel flavour wasn’t that strong. Not every mouthful had the rich burnt sugar taste of caramel. If you told me it was cendol flavour, I would believe you. Still good despite the slightly flavour confusion!

I don’t know what cunning folly took us when we decided to go to The Prata Place for Sunday lunch. My brother topped up the petrol specially for the long drive out to Upper Thomson. It was pretty crowded from the breakfasting masses when we arrived at about noon on Sunday. A pair of regulars were chased off to a smaller table to accommodate our party of five at the crowded cafe.

Even though each of us ordered something different, we hardly had a quarter of what was on the menu. We started off with crisp uppatham (pappadum) redolent with whole cumin. The paper thosai arrived next, a crisp cone accompanied by four types of curry and chutney.

Everyone enjoyed the paper thosai. Most of it was crispy and the thicker base veered towards soft and chewy. I enjoyed that part the best because the thicker parts showcased very well the characteristic fermented rice flavour.

The masala paper thosai was made of the same excellent stuff.

The difference was that it had a delicious masala filling of spiced potato and frozen mixed vegetable.

Now the curry chicken was top notch. It was thick with spices and was incredibly rich and, well, chickeny. The plus point was that it had a different spice mix from the other curries, so we didn’t feel like we were eating the same side curry for the thosai and prata. I alternately dipped  my thosai with that and the other curries. 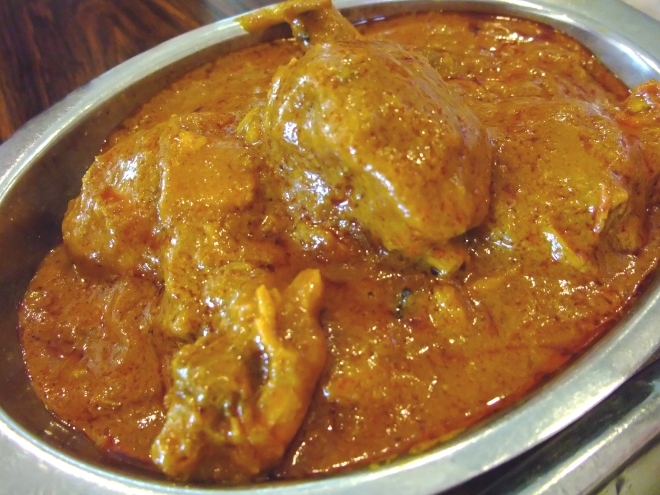 I haven’t had murtabak for a while and was quite surprised to see this thin crispy version instead of the traditional thick and soft one. The change made it a far more manageable portion, though I suspect the calories were about the same from the extra oil. There was plenty of well-marinated chicken from good parts, unlike other places that serve you dried up leftover chicken. 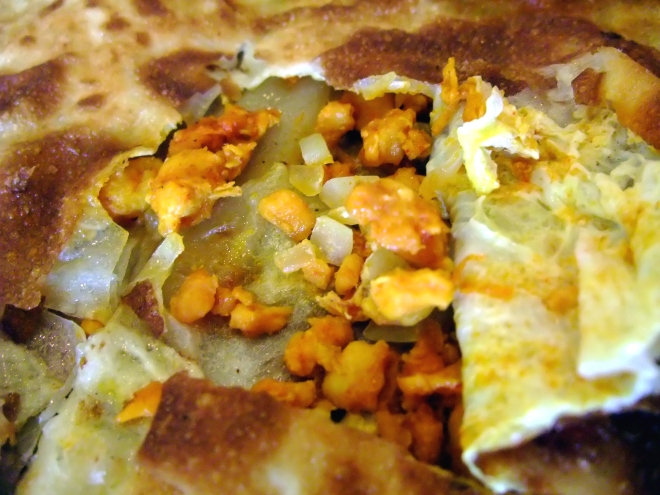 It was good quality and I enjoyed it, though deep down I still prefer the traditional thick version.

We also had paper prata and mushroom egg prata. Both were good with crisp outer layers and soft chewy inner layers. My brother liked the mushroom one because it had lots of large size mushroom slices. I wonder where they sourced their jumbo canned mushrooms.

For dessert we had the banana prata. It worked so well because of the cooked banana pulp inside. They used local bananas so it had a slight sour tang which really hit the spot. I can imagine it working well with chocolate sauce or condensed milk too. 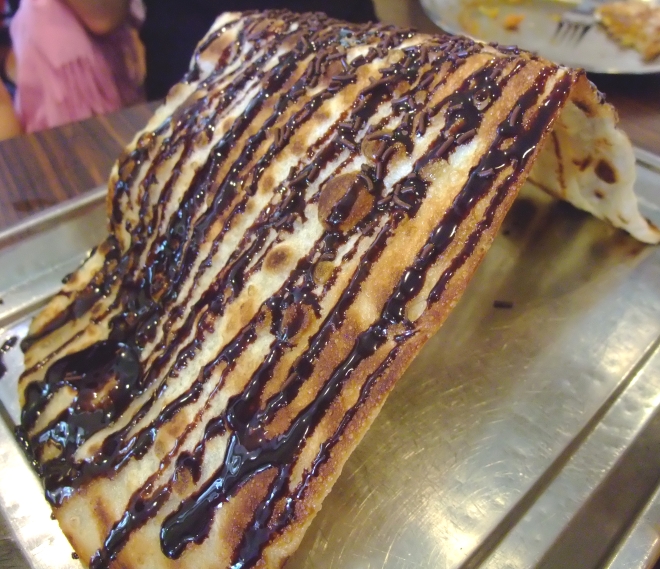 To wash all the oily, artery-clogging goodness down, we had teh bing and teh halia. The teh bing was the best I’ve had in a long while. I had to stop myself from drinking the smooth, fragrant brew at one go. It was just the right sweetness too. Those who had teh halia said theirs was good too. Plenty of ginger fragrance but not too biting on the tongue.